You are here: Home / Our Projects / Asia / Current Project / Widows of India/Om Shanthi

This project began at a grass-roots level after one of Anna Etter´s annual visits to Tiruvannamalai/India. Anna is a citizen of Germany. In 2005, as she walked along a dusty central road, she noticed a dying woman under a bundle of rags along the side of the road. Both of them looked at each other – a moment, which Anna could never forget in her life until now. “Her eyes looked straight into my heart” Anna said later. This inspired Anna to learn more about the life of Indian´s widows, which was so shocking, that she felt a deep sense of urgency to find ways to help abandoned women and widows and their children in India.  This is the power of the love shared through all your kindnesses!

2016 – It has been 8 years since Anna began active efforts to help the widows. Many good things have happened: Om Shanthi Old Age Home was donated by Shanthimalai Ashram and housed 12 old homeless women in 2012.  Since 2007 they also supported women without any means with 300 Rupies monthly (about 7 $). At the end they had 130 women who got this financial support. In the meantime their social worker was busy to apply for the government widow rent for the widows, who were themselves not able to read and write, and they still do so.  So, when most of the 130 widows got their legal widow rent, they stopped their monthly support and started their help for young widows and their children.

A second Om Shanthi Old Age Home has been finished in 2015 adjacent to the existing home, so that now 25 old homeless women are housed and fed. Up to now they still wait for the promised support of the Indian government and are dependent on your kind donations.

Your kind proceeds collected at this time will be directed toward digging another deeper well in the garden of Om Shanthi Old Age Home. Because of the lack of monsoon rain since several years now, there is a shortage of water in the whole region. They also want to employ more female social workers (also single women in need of a job), who care for their widowed or destitute sisters in the villages around Tiruvannamalai and help them in every respect.

Please help with your donations. Om Shanthi wants to pay a salary to their Indian female helpers and social workers, which is adequate to their work and needs, and not exploit them. There are 66 young widows in the community now, who are supported by Om Shanthi Project. Some are trained by Shanthimalai Handicrafts (their partner organization), so that they may become self-supporting and can take care of their children themselves. They also find jobs for young widows elsewhere, which includes survey and control of their situation and their bosses, so that they are not abused. They even get higher education, if adequate. Young widows are trained in writing, reading, English, self-confidence and self-defense. They have to overcome centuries of neglect, abuse and superstition, which made their female life unbearable.

Most of the work is done by love and engagement of unpaid friends of the project in the USA, Germany and India, but they still need your financial help, because the whole work is based on donations. They work hard on changing the old mind-set of poor people in the country-side about widows and single women (which is the majority in Tamil Nadu). The proof of their successful work is the foto of old widows, celebrating Diwali with fire crackers like everybody else, this year for the first time. (Up to today widows are not allowed to celebrate. Not even being present at the marriage of their own children.)

So there is still a way to go!

Thank you for your assistance to our sisters and mothers in India and their children.

With love and gratitude to all of you! Anna (center) at a picnic with widows who reside at the Om Shanthi Old Age Home. 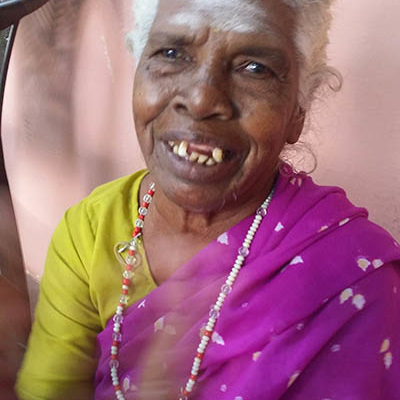